Years go by, problems are the same. What do IDPs want? 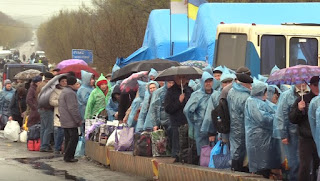 Less and less IDPs from the Donbas want to go back home after the four years of the conflict. In 2015, 54% of IDP wanted to go back. However, in 2018 their number has decreased to 40%. That was demonstrated by the results of the survey conducted by the Rennaissance Foundation in Severodonetsk (the Luhansk region), Bakhmut (the Donetsk region), and Kharkiv.
Some of the respondents have already gone back, whereas others have developed stronger ties with the new place. There is one more reason why those who stayed are unlikely to go back. It is suspense. Nobody knows when the conflict will be over.

Problems experienced by IDPs have remained  the same, but their influence on IDPs' life has changed during these three years. For example, in 2015 renting accommodation was too expensive for 48% of respondents,whereas in 2018 — 61%. The number of those not satisfied with their life conditions was 18% in 2015, and 20% in 2018.

According to Marina Shpiker, an employee of Kyiv International Institute of Sociology (KIIS), jobs which are, as a rule, offered to IDPs cannot satisfy their financial needs.

“There are some vacancies. The problem is that they cannot provide enough money to mitigate problems, for example, to rent accommodation,” Shpiker says.

IDPs expressed three main concerns, and all of them are connected with money.
“The most negative things are that IDP are afraid that they will not be able to buy things they need or to pay for medical care if they need any. And one more concern is that the state will stop payments to them,” the expert said.

The research also demonstrated that there is more accommodation available now: in 2015, 22% could not find accommodation, in 2018 — 5%. At the same time, the majority of IDP cannot afford to buy their own place to live in. About 60% of them are still living in rented accommodation. The figure has not changed for the three years.

Only 6% of IDPs have their own accommodation.

It should be mentioned, that IDPs' emotional ties with the native place are weaker now: if compared to 2015, today they less  often say that they miss their home and think that they are a part of it, they are proud of it and would like their families to live there.

Despite the fact that IDPs experience a lot of problems, the problems are not discussed a lot in MM. According to Pylyp Orlyk Institute of Democracy, in February 2018, IDPs' problems got only 0.8% of coverage in national MM. In local Ukrainian MM, hostilities, problems of veterans, of the wounded and families of the perished got 7-8% of attention; IDPs' problems — 3-4%. The researchers say that the situation has been the same for quite a long time.

In 2017, Kyiv International Institute of Sociology conducted a similar research and found out what the attitude of receiving communities to IDPs was. At that time, the survey showed that the attitude was positive or neutral.

On the whole, at the national level, the positive attitude to IDPs was expressed by 43% of respondents, neutral — by 47% . Only 6% expressed negative attitude, 4% could not answer the question.

According to professor Ihor Burakovsky, Head of the Board of the Institute of  Economic Research and Policy Consulting , the attitude to IDP has not changed for the years of the conflict; however, at the national level, 85% of respondents think that IDPs should go back home as soon as it is possible.

It is interesting to look at the results of the SPHERA Research Centre conducted on the territory of the controlled part of the Donbas in February-March 2018. It showed that the region residents would not like to have IDPs from the uncontrolled area among their colleagues. In the Donetsk region, only 5% of respondents want to have IDPs as their colleagues; in the Luhansk region — 6%.

According to the KIIS survey, competition and resources of receiving communities have somehow reduced by 2018. However, that does not refer to all resources: there is still competition to get jobs and there are queues in public and medical institutions.

In 2017, residents of Ukrainian cities did not feel that there was competition with IDPs. 75% of respondents did not hear about such cases. They think there is competition for employment (17%) or for getting affordable accommodation (14%).

14% of respondents experienced competition when getting a place at school or a kindergarten; 8% — in public and medical institutions. Real competition was experienced by an insignificant number of permanent residents — by 2% in employment, and 1% in other areas.

The researchers notice that by 2018 the need of IDPs in humanitarian programmes has been decreasing; the necessity to develop social infrastructure in Ukrainian cities has been becoming a more important problem. The figures also point out to that. In the past, 75% of IDPs needed aid from volunteers, public or charity organizations. Today their number has reduced to 8%.