Will ministry alone manage to fulfill all Donbas reintegration processes? 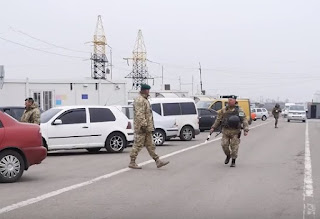 The official state plan of Donbas reintergation was elaborated two year ago. During this period the Ministry of Temporarily Occupied Territories and IDPs (the TOTM) was established and the format of the anti-terrorist operation was altered. This document is referred to the region reintegration processes though experts’ and politicians’ opinions about it are different.
The opinions concerning the work of Ministry of Temporarily Occupied Territories and IDPs differ as well as it is hard to estimate if it is doing enough now to facilitate the reintegrate of the currently uncontrolled Donbas territories under Ukrainian sovereignty in the future.

For example, the research conducted by an informal organization the Kalmius Group* shows that not many people in Ukraine are aware of the existence and activity of Ministry of Temporarily Occupied Territories and Internally-Displaced Persons.

“Only several participants of the survey had at least some idea about the authority and goals of the Ministry and some of its representatives. Those participants who were aware of the activity of the Ministry were really skeptical about it”, said a member of the Group Oleksiy Matsuka.

This lack of awareness if doubled by the fact that not many people understand the meaning of the term “reintegration”. A focus group research showed that not all Ukrainians can understand what is to happen to Donbas according to the reintegration policy. Not all of them are aware of what the Law on Restoration of State Sovereignty of Ukraine on Temporarily Occupied Territory of the Donbas means.

How does Ministry of Temporarily Occupied Territories and IDPs work?

The Ministry was established in April 2016. Its budget comprised 44 million hryvnyas in 2017 and it has quadrupled in the current year and reached 170 million hryvnyas. Specialists from international organizations consult the Ministry officials on many issues. For example, Ukrainian civil servants used to address to the methodology which had been dveloped internationally to help civilians in conditions of a military conflict.

Besides, according to the head of the Ministry of Temporarily Occupied Territories and IDPs, Vadym Chernysh, foreign donors provide financial assistance. It is due to their help that the Ministry is able to implement at least some projects in the country as the funding provided to the of Temporarily Occupied Territories and IDPs programmes by the state is scarce. The sums voiced by Chernysh in his interview given to Interfax in March said that the foreign donors provided 3 billion hryvnyas in two years’ time while the state provided only 17 million hryvnyas in 2017.

“Last year we asked to allocate 1.5 billion hryvnyas to finance our projects and programmes. I mean, we did it ask to give them dircectly to the ministry, but we were going to transfer the money to local communities so that they could solve the problems of internally-displaced persons who live on their territory with the help of the state and local budgets. 17 million hryvnyas were allocated and almost 2 million of this money were spent on purchasing equipment for the centers which render administrative services in the communities where a lot of IDPs are currently living. Several communities joined this scheme of 50/50 funding and bought necessary equipment. The rest of money (15 million) was used to purchase accommodation, on joint funding scheme, for IDPs from two communities, namely, from Mariupol and Pokrovsk. Thus, the sum we had for purchasing flats doubled as the state allocated 15 million and the communities allocated 15 million more. 51 flats cost 30 million, 9 of them were bought in Pokrovsk and 42 in Mariupol”, said Chernysh. He added that 34 million hryvnyas were allocated by the state for a similar project this year.

However, these sums are not enough to help all IDPs who need their own accommodation. International donors, for example, are not involved into helping Ukrainian citizens to purchase accommodation but they allocate funding for technical equipment of checkpoints in Donbas. The problem of crossing the demarcation line is closely connected to how successful the future reintergation will be for Ukraine and for Donbas. The years go by but the number of people who cross the demarcation line daily, going to Donetsk or Luhansk and back, does not diminish. Despite the technical improvement, the conditions people find themselves in while going though checkpoints do not improve even with all the technical advances present.

According to the information provided by the State Border Service of Ukraine, the number of work stations at entrance-exit checkpoints was increased from 84 to 178 during the period from February to October 2017, the technological processes were optimised as well: the pedestrian and vehicle queues were separated which enabled the border Service to increase the number of people crossing the checkpoints. The opportunity for reverse traffic movement was provided for the cases when the passenger flow increases. Besides, it is reported that more than 130 CCTV cameras were installed.

Still, the system of crossing the checkpoints is far from being perfect. State Border Service still reports several times a week that some food, medicines or electronic equipment which were “exceeding” the limit were not allowed to cross the demarcation line and enter Donetsk or leave it. Sometimes those who store “DPR” number plates are reported about to the police and the fact that the person detained may not have another opportunity to move around an uncontrolled city where he or she lives is ignored. A lot of car owners have to keep two number plates in their cars.

The Ministry of Temporarily Occupied Territories and IDPs partially recognizes the fact that it cannot always influence the government, law-enforcers of the Parliament to reach the desirable results. For example, the efforts to revise the principle of compiling the list of goods which can be brought through the demarcation line and replacing it with the list of goods whoch cannot be brought through it have failed so far.

Alla Nazarenko, the head of Donetsk Region Sector in the Ministry of Temporarily Occupied Territories and IDPs claims that currently one of the tasks she as a representative of the institution has is which is occupied with the situation to monitor the situation at checkpoints. Nazarenko says that the donors’ funds were used to equip all the law-enforcers who work at checkpoints with 50 bodypack cameras which “hapmpered the corruption possibilities greatly”.

Centres which render administrative services at the frontline were equipped with the help of the Ministry of Temporarily Occupied Territories and IDPs too. Residents of uncontrolled territories can get biometrical and other documents here. The upsides of such centres are the fact that they are located close to the demarcation line and all the equipment there is new. The downsides are long queues if biomentrical documents are needed and technical сrashes in work which no institution is secured from.

officials say that a single cultural space is to be developed in Ukraine. It was offered to arrange exhibitions, presentations, concerts, performances, etc., with residents of the uncontrolled territory to be their participants. Such events are not held at the official level. At least, journalists do not know about such facts. The situation with developing a single educational space is a bit better. The system is far from being an ideal one. However, it is working. The Temporarily Occupied Territories Ministry (the TOTM) has launched 23 educational centers Donbas-Ukraine which help school students to get distance education, and, as a result, 1.5 thousand school-leavers from the uncontrolled territory became students of Ukrainian universities in 2017.

Still, there are a lot of unsolved problems. They are not only accommodation for IDPs or insufficient quantity of drugs for residents of “the grey zone”. The problem of painless reintegration of the Donbas directly depends on the fact how soon they will recall about the rights of Ukrainian citizens who are living on the temporarily occupied territory and of IDPs.

TOTM Minister Georgiy Tuka has repeatedly claimed that at their Ministry there is no division into «ours-strangers», but this philosophy is not shared by everyone in the government and in Verkhovna Rada. The reflection of his words may be traced in the deeds of people's deputies and members of government committees who regularly block the hearing of bills on paying pensions to people living on the uncontrolled territory of the Donbas and IDPs. Chief of the parliamentary committee on human rights Grigoriy Nemyria has informed recently that bill №6692 was supported by the EU, the UNO, and the European Commission, but it is blocked in the Cabinet of Ministers. According to him, the same situation is with bill №6420 which deals with the IDPs' right to vote.


First deputy head of TOTM Yusuf Kurkchi said the same in April. Making a presentation at a parliamentary meeting, he said that the efforts of only one ministry are not sufficient for returning the Donbas. He added that the Donbas and the Crimea are not the priority for lots of officials and civil servants.

Besides, Kurkchi is afraid that the election campaign will push the problems of Donbas and Crimea residents as well as IDPs' into the background for two years.

It is difficult to say whether the government reintegration plan will bring any significant results as those who have the power have no unified opinion how to treat IDPs and residents of the occupied Donbas – to treat them as citizens of Ukraine or in another way. At the same time, the research of the Kalmius Group showed that Ukrainians understand the problems experienced by civilians of the uncontrolled territory and do not consider them as their enemies. The experts emphasize that the main obstacle for Ukrainians is hostilities. The forecasts are mainly positive: the ties will be improved and strengthened as soon as the hostilities are over.

Analyst Vitaliy Syzov notes is his analysis of the TOTM work that the plan of the measures has been partially implemented, but does not solve strategic issues: "The Ministry raises questions which are not always popular. Unfortunately, the Ministry is not always heard as the issues are political. I would like to believe that in future the Ministry will become a political player and a real driver of reintegration".